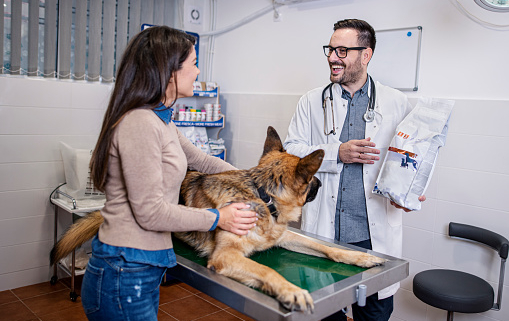 Can dogs be right- or left-pawed?

It might come as a surprise, but dogs can be right- or left-pawed. In the same way that humans show “laterality,” researchers have found that dogs do the same. “Dogs’ brains are organized similarly to humans’, and paw preference relates to the dominant hemispheres of the brain. The left side of the brain controls the right side of the body, and vice versa,” explains Dr. Katy Nelson, senior veterinarian at Chewy. “Whereas only 10 percent of the human population is left-handed, dogs seem to be much more evenly split with paw preference.  They can also not have a paw preference leading researchers to label them ‘ambilateral.

How do researchers determine paw preference?

Proper scientific research is key to studying animal behavior. Thankfully, there have been studies conducted to figure out paw preference in dogs. “Researchers use various methods to determine paw preference. One is the ‘First-step test,’ where dogs are in a sitting position and when they rise, they use their dominant paw to start off walking,” says Nelson. “The other is the ‘Kong test,’ where researchers give the dog a Kong toy filled with yummy treats and they count the number of times the dog uses one paw or the other to paw at the Kong to get the treats out

Is Your Dog Right- or Left-Pawed?

Think about which hand you write with or how you hold your fork. Are you a righty or a lefty? Now think about your dog. It may surprise you to learn that, just like humans favor using their right or left hand, many dogs show a preference for using one paw over the other. Because a dog’s brain is organized similarly to ours in many ways, with two hemispheres that each hold specializations, they, too, can show “handedness,” or what researchers call “laterality.”

The majority of people are right-handed, with about only  of the world preferring to use their left hand. But the same can’t be said for dogs. Our canine companions show a more even distribution between righty’s and lefty’s. Also, many dogs are ambilateral, meaning they are equally comfortable using either paw, what we call ambidextrous in humans. However, the exact percentage of right-pawed, left-pawed, and ambilateral dogs depends on the way laterality is measured.

One of the most popular research methods is known. The experiment involves giving a dog, a hollow cylindrical rubber toy that has been stuffed with food. The dog needs to hold the toy still while he works to get at the food. The number of times he uses his left paw to hold the toy is compared to the number of times he uses his right paw, or even both paws at the same time. This allows the researcher to classify the dog’s paw preference. These studies tend to show that there are an equal number of left-pawed dogs, right-pawed dogs, and dogs with no paw preference.

Another method for looking at laterality is the. In this experiment, the researchers measure which front paw a dog uses to take his first step from a level standing position. After multiple replications, the dog’s paw preference can be classified. Unlike the Kong Test, this method doesn’t depend on the dog’s level of food motivation. This technique has shown different results from the Kong Test, with far more dogs showing a right paw preference.

Yet another  looked at laterality by placing food dishes at 45-degree angles to a dog’s left and right and allowing him to choose a dish. The dog was able to eat from both dishes during the trial, but his first choice in the majority of the trials was used to classify his laterality. The results showed that over one-half of the dogs were ambilateral, while the remaining dogs were almost equally distributed between a right and left paw preference.

Paw preference, like handedness in humans, relates to activity in the brain’s hemispheres. The left hemisphere controls the right side of the body, and the reverse is true for the right hemisphere. Because each hemisphere is involved in processing different emotions, laterality may impact personality and behavior. One  showed that ambilateral dogs exhibit slightly less aggression toward strangers. In fact, it was the left-pawed dogs that showed that behavior the most. (Of course, there are far more factors at play with  than simple paw preference, such as  history, past trauma, and. And, as the researchers admit, the temperament assessment used may not be sensitive enough to detect differences between individuals based on their literation.) Another  showed that potential  that are right-pawed have a higher success rate in their training programs. Future research may find more links between behavior and personality and paw preference in dogs.

Perhaps you want to know your own dog’s paw preference. After all, if you’re going to teach him to , or wave at you, it would be helpful to teach him with his dominant paw. You can replicate the Kong Test, First-stepping test, or food dish choice task at home. Be sure to gather lots of data. The official Kong Test and First-steeping Test both use 50 instances. Or you can devise your own test. For example, hold a treat in your closed hand and note which paw your dog uses to interact with your fist. You can also observe your dog’s behavior and note any laterality. For example, which hind paw does he use to scratch himself or which leg does your male dog lift when urinating. However you test your dog’s paw preference, knowing whether he’s a righty, lefty, or ambilateral should give you a new appreciation for how he interacts with you and the world around him.

Like humans, all dogs are different, so there’s no definitive answer to the question as to whether or not a dog is left or right-pawed Another reason why it’s hard to nail down statistics is that dogs aren’t formally tested for dominant paws. However, many experts believe that dogs have a more equal chance than humans of being either righties or lefties. And while many dogs have dominant paws, many also have no preference between their right and left paws.