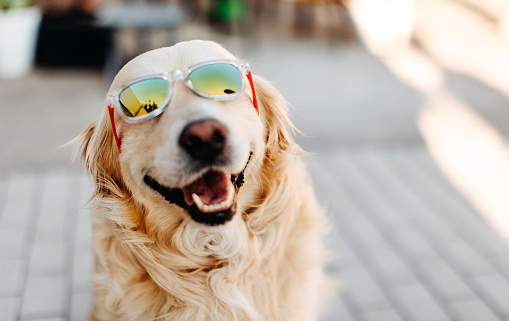 Dogs love to sniff. Sometimes they sniff so much, you might wonder if they’ll ever come up for air. Truth is, they don’t have to. Their noses are structured so that they can ponder a scent and work out what it is while air continues to move freely in and out of their lungs. That’s a pretty handy trick especially when you have a 300 million olfactory receptors and a whole world to smell.

Why are noses important to dogs?

The canine nose does more than smell the roses. While humans primarily depend on their vision, dogs use both sight and smell to assess their surroundings and communicate. People spend more time interpreting visual data than olfactory information. Dogs are just the opposite.

Dogs devote lots of brain power to interpreting smells. They have more than 100 million sensory receptor sites in the nasal cavity compared to 6 million in people, and the area of the canine brain devoted to analyzing odors is about 40 times larger than the comparable part of the human brain. In fact, it has been estimated that dogs can smell anywhere from 1,000 to 10,000 times better than people.

While noses do not actually speak, they do communicate. With a single sniff, noses interpret an entire story without words by using amines and acids emitted by dogs as the basis for chemical communication. The chemical aromas communicate what a dog likes to eat, and identify gender and mood. By simply smelling, a dog can determine if a new friend is male or female, happy or aggressive, healthy or ill. Dogs get a general idea about each other with a quick sniff, but get more detailed information by getting up close and personal. That is why some dogs sniff private parts of the anatomy!

Dogs also have a good scent memory that can identify other dogs they have not seen for years, and even remember which of them was the dominant member of the pair. When dogs belonging to the same family are separated for a while, they use sense of smell to catch up on things. Changes in odors may convey where the dog went, what he ate, and what he did.

When in a new territory, a dog can sniff a tree and determine what other dogs live in the neighborhood. They can smell a visitor’s pant-leg and get a good impression of where the person lives and whether he has pets at home.

Dogs also have a great homing instinct that depends on their ability to smell. Since dogs move their nostrils independently, they can determine the direction of an odor and use their sense of smell like a compass.

Here are eight more interesting facts about your dog’s sense of smell that prove that canines have superior noses.

According to Dr. Nappier, a canine’s nose has the ability to separate air. A portion goes directly to the olfactory sensing area (which distinguishes scents), while the other portion is dedicated to breathing.

Read More: Dogs are so adorable they make us love them

“When sniffing, dogs’ noses are designed so that air can move in and out at the same time, creating a continuous circulation of air, unlike humans who have to either breathe in or out only,” says Dr. Nappier.

According to Dr. Nappier, a dog’s vomeronasal organ helps them detect pheromones, which are chemicals that animals release that affect other members of the same species. This organ plays an important role in reproduction and other aspects of canine physiology and behavior.

Dogs can smell separately with each nostril. Just as our eyes compile two slightly different views of the world, and our brain combines them to form a 3-D picture, a dog’s brain uses the different odor profiles from each nostril to determine exactly where smelly objects are located.

Dogs can detect the tiny reductions in the concentrations of odor molecules that occur over short periods of time. This allows tracking dogs to quickly determine which direction a person or animal has gone in by sniffing the ground.

According to Dr. David C. Dorman, DVM, PhD, DABVT, DABT, professor of toxicology at North Carolina State College of Veterinary Medicine, dogs have used their noses to assist with major life events since the beginning of time.

“Evolutionarily, a dog’s sense of smell helps them find a mate, offspring, and food, and avoid predators,” he says.

Dr. Nappier puts this tidbit into perspective with an awe-inspiring analogy. “A dog’s sense of smell is its most powerful sense,” he says. “It is so sensitive that [dogs can] detect the equivalent of a 1/2 a teaspoon of sugar in an Olympic-sized swimming pool.”

Load More... Subscribe
This error message is only visible to WordPress admins


Unable to retrieve new videos without an API key.

Dogs are so adorable they make us love them

Dogs encourage you to move
Scroll to top