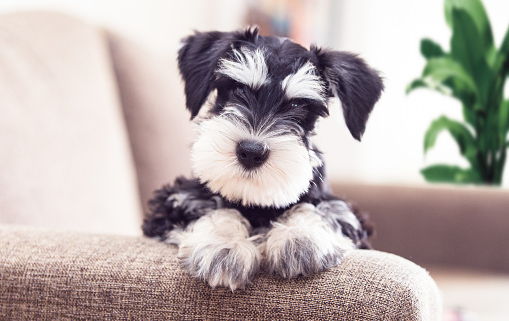 A Miniature Schnauzer is a terrier dog that has a hunters’ heart and personality that is opposite to its size Miniature Schnauzers. It was bred as a farm dog but over time it has moved from farms to people’s homes, making them one of the most popular breeds in the world. This is due to factors such as the dogs’ small stature, friendly nature, and high intelligence. They don’t shed much from their coat, making them ideal for families that are concerned about shedding, wire-haired double coats can be solid black, black, and silver, salt and pepper, and solid white-colored in color the miniature dogs, were bred first in Germany.

This was in the late 19th century.  Miniature Schnauzers are descendants of Standard Schnauzers and Affenpinschers. They are the smallest among the Schnauzers. Also, they are the only terrier not originating from the European Isle stock.

Schnauzer, in German, means beard. Over time it has moved on from farms and has become one of the top pets to people in houses and brings joy to those it lives with due to the personality of these dogs.

How many Miniature Schnauzer are there in the world?

The healthy Miniature Schnauzer is found as a pet in thousands all across the United States, Germany, United Kingdom, and other countries worldwide, including Australia. Miniature schnauzers are not classified under any conservation category and are a very popular pet breed due to their personality. This breed was registered by American Kennel Club (AKC) in 1926.

Where does a Miniature Schnauzer live?

Miniature schnauzers were bred to live on farms but have over time moved to live in houses. They are one of the most popular dog breeds across North America, particularly in the US and in Europe (the UK and Germany). It makes for a fantastic house dog and has sociable characteristics. It has a strong desire to be included in all family

The word schnauzer originally comes from the German word schnauzer, which means scouter. This was clearly referencing the dog’s square and uniquely whiskered snout, which separates its phenotype from many other dogs. But this wasn’t what they were originally called. In fact, for the first four centuries of their being, they were referred to as the Wire-haired Pinscher.

In 1870, Dog showing became popularized in Europe. The distinct mustachioed look of the Wired-haired Pinscher made it a standout on the scene, which led to fanciers renaming the breed Schnauzer to highlight its distinctive whiskered snout.

They were Miniaturized in the 19th Century

Want some fun facts about Miniature Schnauzers? Well, the Standard Schnauzer was first miniaturized in the 19th century by mixing them with the Affenpinscher. This was done to make a more house-appropriate and cost-effective version of the regular schnauzer—one that still had all the enviable qualities of its larger cousin.

The Miniature Schnauzer was exhibited as a distinct breed as early as 1899. It’s thought to have been derived from breeding the smallest of the Standard Schnauzers with Affenpinschers, gray Spitz, and black Poodles in a highly selective breeding program. Four Miniatures imported by Mrs. M. Slattery of the Marienhof Kennels in 1924 were the foundation stock for the breed in America. Miniature Schnauzers were first registered as a separate breed in 1926. The following year the first American champion was Mrs. Slattery’s Ch. Moses Taylor. This was an honor shared with Don v. Dornbusch since both won on the same day – but at different shows.

chnauzers have a look that is unique to their breed. These bearded canines have a regal look that makes them come off as being snobby with a sense of elitism, but this couldn’t be further from the truth. They have a distinguished appearance, but they are actually friendly and very loving pets who truly love to entertain. What’s really cool about the breed is that they come in three different sizes and a variety of colors. The giants are the largest, followed by the standards which are medium sized dogs, and the miniatures for people who prefer a smaller dog but love the look and temperament of the breed. If you’re considering becoming the owner of a schnauzer, there are a few things that you need to know. We’ve put together a list of 20 things that only schnauzer owners would understand. If you’re already a fan, then you’ll smile and agree with these entertaining and informative facts about these amazing dogs.

1. The neighbors may think you’ve adopted a walrus

There is something that is so cute and endearing about the beard that distinguishes a schnauzer from other types of dogs. They do slightly resemble a walrus in the face, because of their big bushy mustaches, but this is where the resemblance ends. Schnauzers are far more attractive. Their bearded faces have a regal look about them. This is a dog that fits in very well in royal and prestigious circles. We weren’t kidding about the walrus remark, but their bodies are much leaner and well-muscled Miniature Schnauzers.

Your schnauzer will become your shadow. He will take an active interest in where you’re going and what you’re doing. He’ll follow you into the bathroom if you allow it. He’ll be waiting on the mat when you go into the shower, and he’ll be in the same place when you get out. If you don’t let him in the room with you, it’s almost certain that he’ll be waiting for you outside the door. It’s only because he loves you so much that he wants to be near you most of the time. Loneliness is a thing of the past when you’re the proud parent of a schnauzer.