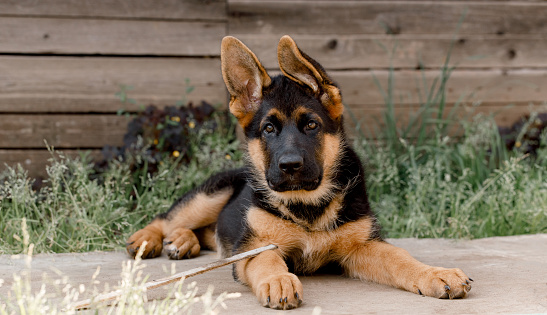 They Were First Bred by Max von Stephanite

Although they are now one of the most popular breeds in the world, German Shepherd Dogs are a relatively new breed of dog. In fact, the first German Shepherd was not born until 1889 and was bred by a man called Max von Stephanite, who is known as the father of German Shepherd Dogs. He bred dogs for shepherding and saw a wolf-like dog in yellow and gray that grabbed his attention.

They Go by Many Names

This breed of dog is most commonly referred to as the German Shepherd, although it is one of the few breeds whose official name includes the word dog as its official name is the German Shepherd Dog. The word dog is included in the name to distinguish the canines from humans who work as shepherds in Germany. However, this is not the only name by which it is called. In Germany, the country of its origin, the dog is called a Detacher Shafer Hund. In England and Ireland, the dog is often referred to as an Alsatian.

Another name by which it is sometimes known is as the Berger Allemandes. As the breed is so popular in the United States, Americans began talking about removing the German part of the name from 1914 onwards. The American Kennel Club did remove the German part in 1917 and it was then known as the Shepherd Dog. However, in 1930, members of the club voted to change the name back to its original version.

The First Dog to Aid the Blind Was a German Shepherd

Dogs are commonly used as an aid for people with a visual impairment. People who are blind or have limited vision use a guide dog as a means of managing their daily lives. The dogs help to guide them around their homes and also in external environments. Although there are many different breeds of dogs used for this task, it is a canine role most associated with Labradors and Retrievers. However, the first guide dog for the visually impaired was actually a German Shepherd Dog. ‘The Seeing Eye’ was founded in 1929 by Mrs. Harrison Eustis. The purpose of this foundation was to train dogs to guide the blind.

The first dogs they trained were German Shepherd Dogs. Morris Frank was a blind man who had read about men who were blinded during World War I and he came across information about the dogs being trained in Switzerland. He contacted Mrs. Eustis about having one of these dogs himself. The reason that German Shepherds are now used to a lesser extent in work as a guide dog is that the traits of the breed were compared to those of Labradors and Retrievers. The tests showed that the disposition of the latter two breeds of dog were better suited to this variety of work while German Shepherd

Across the internet it’s easy to find a slew of funny dog breed slogans, most that poke fun at the breed’s stereotype. However, the German Shepherd does have its own motto that stems from Captain Max von Stephanite and his original German Shepherd Dog Club. The German Shepherd motto is: Utility and Intelligence.

German Shepherds have found fame throughout the years as movie stars—Rin Tin Tin and Strong heart were both popular in the 1920s. GSDs also have been famous as service dogs, including Apollos, the first German Shepherd police service K-9 to respond to Ground Zero on 9/11. However, it was Buddy the GSD who became the first  to Morris Frank in 1928. The hard-working seeing eye dog trained in Switzerland at a school operated by American Dorothy Harrison Eustis.

After Morris Frank returned to the United States with Buddy and had enormous success with the seeing eye dog, Eustis returned to the States as well. She worked to establish The Seeing Eye, a school to train more seeing eye dogs and Morris Frank became its managing director, with Buddy at his side. The school continues today to train service dogs for the blind. Bonus fact: Buddy’s original name was Kiss and she was a female.

The German shepherd dog (GSD) has consistently been ranked as one of the most popular dog breeds in the U.S.

A family favorite and a resourceful working dog (search and rescue, guide dog for the blind, security and military), this breed is confident, loyal and eager to please.

If you need any further proof this breed is as revered as it is, there’s even the national “13 Club” for German shepherd dogs that are twelve years of age or older.

Load More... Subscribe
This error message is only visible to WordPress admins


Unable to retrieve new videos without an API key.

some dogs are incredible swimmers

Things You Didn’t Know About Miniature Schnauzers
Scroll to top