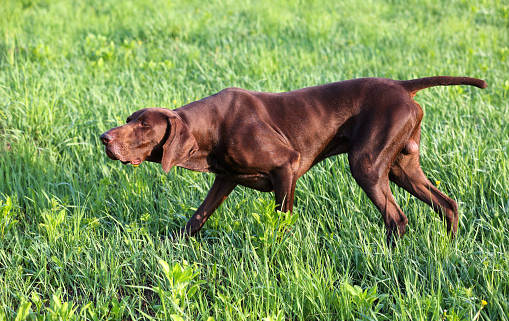 Your furry friend’s ears are not only adorable they are super interesting Dogs have 18 muscles controlling their ears  Here are some fun facts about your dog’s ears!

There are about a dozen different dog ear shapes

You knew that different dogs have different shaped ears, but did you know there were so many?  has a great illustrated chart. Some shapes include:

1. They have more than a dozen muscles.

Dogs have at least 18 muscles that work to tilt, raise, and rotate their ears, which helps them identify and capture sounds from different directions.

2. They have a long, narrow ear canal.

Unlike humans who have a very short ear canal, dogs have a long, narrow ear canal that makes almost a 90° bend as it travels to the deeper parts of the ear.

3. Dogs with floppy ears may have more ear problems.

Compared to cats, dogs tend to have many more ear problems and — especially breeds with floppy ears, such as Basset Hounds, and dogs with cropped ears.

Your dog’s hearing ability is dependent on their breed and age, but the average hearing range is usually around Human hearing stretches from 20 Hz to 20,000 Hz (or 20 kHz), but most adults actually top out at 16k Hz.

5. They have a higher hearing frequency than humans.

Domestic dogs can hear significantly higher frequency sounds than humans, although not as high as cats. They also have a different acoustic perception of the world. Sounds that seem loud to people often have high-frequency tones that can scare dogs. Ultrasonic dog whistles have been used in dog training because they produce sounds at frequencies higher than those audible to humans but well within the range of a dog’s hearing. Even during the quiet hours of the night, the world is a noisy place for dogs, who can hear the high-frequency pulse of the crystal resonator used in digital alarm clocks and bodily vibrations of termites in nogs